← Coffee as Community
For Your Edification →

When was the last time you had a positive retail experience and wanted your picture taken with the person who helped you? I’m guessing NEVER would be the answer. Much to the embarrassment of my 18-year-old daughter, I took this picture of my wife and Mike Lane (shout out to @mikelane) at the Apple Store in Portland, Oregon.

Compared to the Microsoft Store ½ block away where there were eight employees and one customer and the AT&T Store with five employees and four customers (but only one customer being helped), the Apple Store experience was MUCH different. 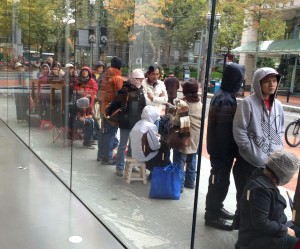 First things first. There was a LONG line 20 minutes before the store even opened. No worries, though. The group was orderly and there were at least three Apple Store employees working the line, performing a sort of triage and answering questions. With their mobile devices in hand, they lets us know what they had in stock, put in a reservation for service, told us what time to return and who would help us. 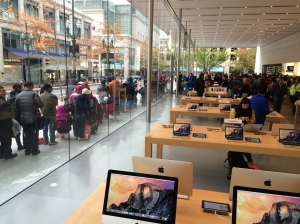 It turns out that most of the people in line were purchasing unlocked iPhones, which I suspect were quickly resold and sent overseas. The Asian woman with a large suitcase hovering over the large, 100-person group was a tipoff. But here’s the important service lesson: Apple had designed a process that segregated and prioritized those purchasing under a cellular/data plan from those who were not. Instead of having to wait, we were given a reservation and could return after the store was open within a designated time period to complete our transaction.

We went off exploring and then returned. Mike Lane assisted us. He was patient, took as much time as required, was pleasant and most helpful. Hence the photo.

This was no accident, but, rather a service experience that was carefully designed. The result? What started out to be a purchase of an iPhone 6 for my daughter ended up including an iPhone 6 for my wife and my own iPhone 6 Plus (thanks AT&T Next Program).  Happy customers, happy Apple employee and now a blog post to tell the tale. Word-of-mouth marketing = priceless.

Seems like the Microsoft Stores, AT&T Stores and many of the other retailers should take note. Much like my previous posts on IT as a Service (here and here), we need to thoughtfully design the experience we desire. If not, we’re just standing around waiting to frustrate people.

P.S.  It was the Apple employee who sent me to the AT&T store to cancel my AT&T order that had been in the queue for six weeks. It was not a pleasant experience.