One doesn’t need to venture far from Madison to escape the self-created, always plugged in, move to the next scheduled activity, and “What else do I need to get done today?” world. In less than 40 miles, you slip from LTE to 4G to Edge service (and frequently NO service).  Perhaps not everyone sees Edge service as a bad thing.

The weekend before last, we escaped to the Little Sugar River Farm in Albany for our second visit this year. This time, I traveled there by bike. What a great transition from the hustle bustle of daily life to a serene getaway – 2.5 hours of solitude. The ride was glorious (see picture). The weather, scenery, and nature along the way—birds, smells of spring, scurrying rabbits, squirrels, and turkeys—reconnected my senses to the natural world.

A stop in Monticello brought back connections to times past. A grandmother and her granddaughter were selling VFW “Buddy” Poppies. The granddaughter was delighted to be the “Poppy Princess,” which she enthusiastically explained as, “You sell poppies, ride in the parade, and get your picture in the paper.” It was a pleasure to donate my two dollars.

Owner Frank Goodman met my arrival at the farm with a wave from the seat of his International Harvester tractor/mower. He was tending to what referred to as his “prairie restoration in progress” just inside the gate. The weekend was off to a good start.

While the weather wasn’t great, the skies did clear for a bit of biking. Unfortunately, the Sugar River State Trail was soft due to the recent rain and not conducive to skinny bike tires like it is when dry and more heavily traveled. Instead, we went off to New Glarus for a short local ride.

An expected highlight was the lunch we had at Cow & Quince in New Glarus. The food was exceptional, a true farm-to-table experience that included local asparagus, morel mushrooms, pork, gouda, and more. They are raising funds from local backers with a Kickstarter-style “Community Supported Restaurant” campaign. Good stuff—this Isthmus review captures it well.

Along the way to and from, we saw boys fishing in a creek, children biking to downtown Monticello, and a local bike rodeo event in New Glarus, as well as much local farming activity. The weekend connected me back to some of the simpler things in life I so enjoy.

When Monday dawned, it was back to my busy, plugged-in, LTE network world.

It was with great pleasure that I watched “The Gentle Giant” Marcel Kittel win the final stage of the 2014 Tour de France this past Sunday. Vincenzo Nibali was crowned the overall race champion on the Champs-Elysées. 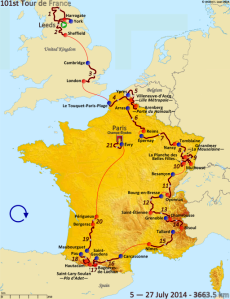 The average speed for all 2,277 miles of this 101st tour was just over 25 mph. In 1984, the average speed was 22.25 mph. A 10% increase in average speed in 30 years is pretty impressive. This is even more so when you realize that the relationship between speed and power required is a logarithmic scale. That 10% increase requires approximately 25% more watts of power output.

Nibali’s Astana Pro Team has a checkered past in the doping scene, once providing a home for Alexander Vinokourov (2007) and Lance Armstrong (2009 comeback season). They now claim to be clean. Given the increase in performance times, is this plausible? Given the history of widespread doping throughout professional cycling, both revealed and still hidden, does it matter?

What will they think of next? The Airdog is a Video drone that flies itself

Even in the most utopian workplace environments, conflicts arise. These 5 Questions You’ll Need to Settle Workplace Disagreements is a handy tool for finding a resolution.

To a bike geek like myself, there is no greater hero or villain than Lance Armstrong. Lance Armstrong in Purgatory: The After Life recaps his rise and fall and shows how life has changed for the super athlete now that he is no longer atop the podium.