The Seven Most Influential Things I Read in 2014 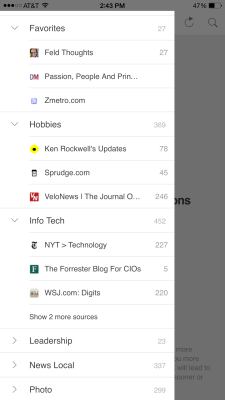 Amidst the flurry of year-end recaps, several bloggers did an iteration of “This Most Influential Things I Read This Year.” This is a very interesting question—here’s my take.

Theory U. “Theory U proposes that the quality of the results that we create in any kind of social system is a function of the quality of awareness, attention, or consciousness that the participants in the system operate from.”

Continuous Productivity: New tools and a new way of working for a new era. “Continuous productivity is an era that fosters a seamless integration between consumer and business platforms.“

Davos: Mindfulness, Hotspots, and Sleepwalkers. All the signs are present that mindfulness is reaching the tipping point.

The Re-working of “Work”. “This report analyzes key drivers that will reshape the landscape of work and identifies key work skills needed in the next 10 years.”

Build a change platform, not a change program. How to make change the status quo, not an interruption.

Lost and Found in a Brave New World. At a time when so many feel culturally, organizationally and/or personally “lost,” how can we find our way back to the values and beliefs we hold dear? In the new world, new maps are required. The first step is to realize and admit you’re lost.

The Last Re-Org You’ll Ever Do. Three new approaches to doing business are showing promise (Holacracy, Agile Teams and Self Organizing). Viewed as way out there by some, but, nonetheless, they are happening.

$1B CISCO Intercloud Investment. Cisco is going to be the “engine inside” many cloud offerings, from Telecom companies to software vendors and traditional distribution partners.  This goes well beyond IaaS to encompass collaboration, unified communication, mobility, big data, etc.  Of note: Openstack and Hadoop are significant elements of the offerings.

What’s gone wrong with democracy. The Economist looks at the decline of the most successful political idea of the 20th century.